Of Crocuses and Moles

The autumn crocus is a very reliable flower, it always comes at about the same time, if not actually at official autumn according to a calendar.  It comes when it decides it feels like autumn, or is just the time that it wants to come.

We have one very reliable plant, it is just next to a broken pot which is now so covered in ferns that no one can remember whether it really was a pot, or just a random tree stump. 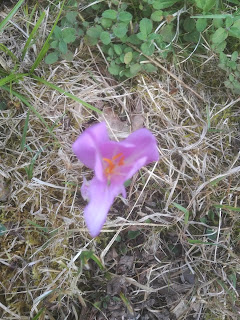 It is usually solitary even though its spring leaves promise more, But they get strimmed.  However, I am told that although a crocus springs up from a bulb it does seed and some of the seeds become bulbs. This year, in a much neglected part of the front garden we saw the result. 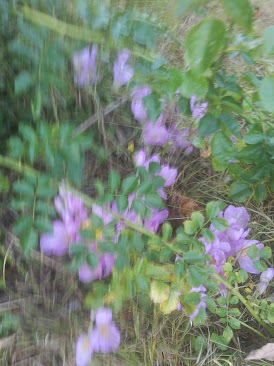 And yet we never have any crocuses (or should I say 'croci?) on the other side of the house. Perhaps it will take more than the 40 years we have been at La Chaise for the invisible seeds to settle and become bulbs.

We did once try to plant bulbs on the other side of the house.   I had visions of swathes of daffodils, narcissus, jonquils at the end of the lawn.  But of course I had forgotten all about the resident moles.  About a third of what we planted flowered but only once. And, curiously, the moles do not come round to the front of the house.

Posted by doina percival at 9:24 AM