It is an unspoken truth in the Dordogne that its country dwelling places are biodegradable. This applies to farmhouses, the attendant barns, pig sheds and workers’ cottages. Obviously it is not true of chateaux, maisons de maître and the little shrines over springs and holy places. But it is true of the rest, hence, until very recently, any man who was a man had to be able to pop up on his roof and fix any leaks immediately.

The original manner of construction began with a pile of chalk stones gathered from the fields. These were put into shallow channels anywhere between 40 cms and 50 cms wide. As they rose to become walls the outer sides were sealed with a form of mortar and the inner with mud.(We know this because we found rat carcasses inside our walls.) The corners, window and door frames were created and supported by solid chalk keystones.

The walls of the building were often not set equally deep into the ground, especially when the site was a slope. This would lead to an imperceptible pull on the walls – our house is 10 cm wider at roof level then at the ground leaning outwards on the downward slope.

To create the Shepherd’s Cottage inside the sheep barn we first had to dig out the beaten earth floor so that people could stand upright everywhere. The nearside (to our house) wall immediately started to collapse inside. An appalling noise ensued. Not to worry said the then mason cheerfully. He ‘propped up’ the ceiling beams with scaffolding and rebuilt the bottom of the wall. Then cement jointed all the stones.
.
But we have suddenly discovered a second weakness in our wonderful, hand-built, gobbed-up stone houses. The corner stones can also be fragile, they are after all only a form of highly compressed chalk. They don’t take kindly to any form of cement as witness our terrace stairs. 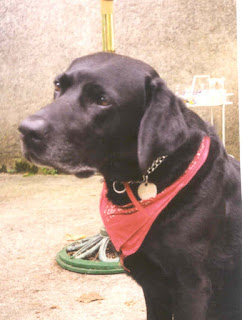 A few years ago, Edward Le Prince Noir de La Chaise, (labrador, see above) was terrified by a sudden clap of thunder. He had been comfortably hiding under the lunch table. Linked to the table by his ed scarf, he launched himself down the stairs and towards the woods – the table, a stone geranium pot and part of the balustrade and ramparts went with him. Last summer the tractor just touched the bottom pillar and pulled the whole of the other side over. We vaguely tried to get it repaired but stone experts signally failed to supply cement to stick the pieces together again. Too porous for cement they said.

Then, at the end of this past winter we discovered that either the nearside end of the sheep barn wall, or roof, had moved. This was visible because the joints between the plaster board ceilings and walls had cracked open. Visions of 12 metre long wrought iron ties hold the two barn ends together, or external pattes d’elephant - solid concrete triangles to prop the moving wall, haunted our dreams. Either solution would cause great difficulties for holiday makers as well as ourselves.

Fortunately the A² (Alex & Audrey) grapevine dug up a stone mason of their own generation who lived nearby. He was not impressed. Pointing to a corner stone half-way up the kitchen door frame he said: there is the problem. Indeed, this stone had a triangular wedge taken our where some beam had been wedged in, presumably to make a lean-to, long since gone. His solution?: to prop up the first floor along the length of the wall with scaffolding inside, remove the defective stone and slide in a new one. Simple really.


Posted by doina percival at 1:01 PM No comments: