APRIL WAS NOT THE CRUELEST MONTH

Not this year, this year I managed to do something that - for me - was a major triumph.   I managed to take a picture of a butterfly as it was resting on a tree. 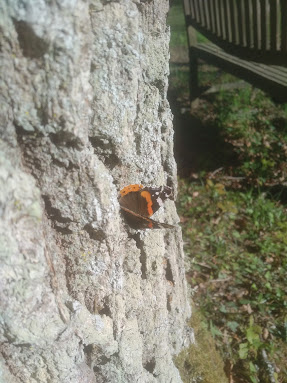 Sadly I do not feel qualified/competent to say which type of butterfly it was ....I am tempted to say 'Red
Admiral' but would not bet on it.
This was in the second week of April.  The Weather Gods were tranquil - possibly soothed by the warmish weather they had created.    Anyhow all the wild flowers showed themselves in abundance. The daisies, buttercups and especially the dandelions covered almost every inch of soil.  Was I glad that I live in France, so feel no need to make dandelion wine. 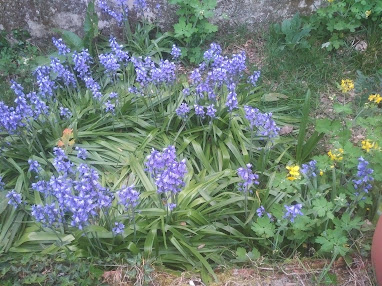 These bluebells are in a shady spot between the garden wall and the dilapidated chicken house (yes, am going to renew it) which meant that, as you can see, a path got trodden in the middle of them.   However there were many clumps in various corners of the garden, mostly in unexpected spots.  They lasted for nearly three weeks before beginning to droop.
Another burst of colour came in the woods.   The broom sprang out into flower, almost hiding its leaves.
As it is situated on a corner of the woods, I have a good view of it every evening when sitting on the terrace with (yes, of course) my evening drink - not dandelion wine. 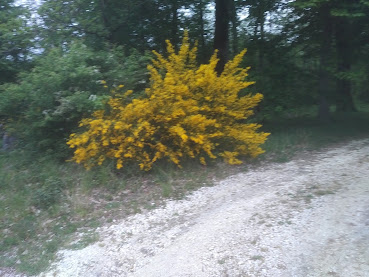 Not to be outdone the - shall we say civilized flowers - were also ahead of themselves, especially the wisteria.  This was a mixed blessing for while it's colour is wonderful, its flowers are frail. The terrace was quickly covered in pale purple flower heads which made walking a little dangerous.   Sweeping them up would have meant a twice daily chore, so I just stopped using the steps down.... 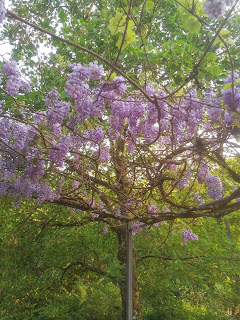 So here it is, on the corner of the trellis work, a wonderful colour but possibly not a good addition to a glass of Pouilly.....I have made a note to check whether or not the flower is edible.....somewhere upstairs I have a book (in Dutch) called 'cooking with flowers'. Must find.
Two other cultivated plants are also out-doing themselves, the ceanothus and the honey-suckle
The ceanothus was supposed to be a border plant to the vegetable garden but looks as though it wanted to join the ranks of vegetables.  The honeysuckle, however, has dutifully stayed on the fence surrounding the smaller gite... 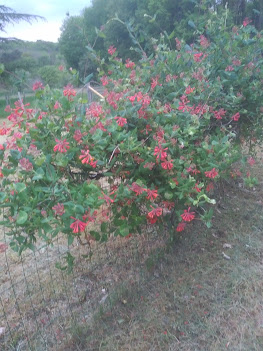 And to my great joy, the absence of sheep, means the wild orchids are venturing back.  There are two of them that I have spotted (I am discouraged from walking in the fields because of hay potential).   One is colloquially known as the 'lazy purple', the other as  the
'early purple'... 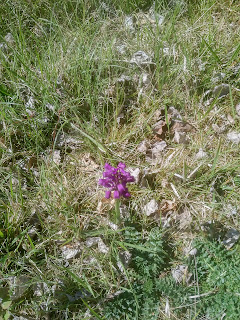 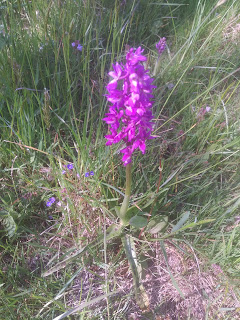 Posted by doina percival at 6:08 AM No comments: