10001 ways with a home grown courgette

The courgettes are coming, thick and fast, thin and fat, short and long, bright yellow and two shades of green, pale and dark. So, can tomatoes be far behind?
A rhetorical question.   The answer lies....in the soil, of course...and the behaviour of a climate on which we no longer can rely. The wisdom of the ancients, however wittily or obscurely expressed, is no longer of help.   So far A&A's tomatoes have shown no urgency to join the massive courgette production.   Tomatoes are still trucked up from Provence.


The courgette, of course, is an inevitable constituent of the 'Mediterranean' diet, at least the vegetable part.   But home cooks soon run out of ideas on presentation and consumers turn as yellow as the vegetable itself if it is offered more than twice a week, undisguised.  So what to do?

Most courgette cooking methods involve frying in some form or other.  So courgettes have to be salted and allowed to stand as excess water drains off. Then, most often combined with aubergines (equally lightened of their water content) onions, tomatoes, garlic and herbs, they are reduced to a mush which is proudly presented as ratatouille.  Courgettes can be presented as spaghetti substitute, or better still as papardelle. Still difficult to avoid mushiness.

Once I was served 'grilled' courgettes, thin slices which had been marinated in best olive oil and then laid (gently) on the ridged, cast-iron grill normally used for meat. Delicious - but not to be tried at home, brain damage to prepare and cook.  Believe me, because I did.   Some things really should be left to experts with many hands to assist them.

The most irresistible courgette dish is zucchini fritti, courgettes cut into match-sticks, battered, deep fried and served immediately.  Not easy in the average domestic kitchen.  However, the American technique of 'shake and bake' means zucchini fritti can now be made at home without too much hassle.   Only the usual problems attendant on deep frying.

The original 'shake and bake' flour mixture that I discovered was destined for chicken pieces.   It was just seasoned flour (salt, pepper, possibly some finely ground herbs or spices which was put into a paper bag, the oiled chicken pieces added, the whole shaken - chicken pieces then put into hot oven.  Result: very tasty.

To apply this method to courgettes is simple: use the match-stick blade of the mandolin, put pieces in sieve, sprinkle with salt and allow to disgorge.  Dry lightly in a tea-towel, then tip into a bag with your favourite mixture of seasoned flour.   Shake, deep fry and serve immediately.

This Sunday's mistake was to use self-raising flour, all that I had in store.  Bad planning, I know.   It made for a very sticky mess, zucchini fritti in clumps, rather like onion bhajis, but still delicious.


What not every non gardener may know is that the courge family of vegetables is rampantly aggressive.  Plants will escape over the garden wall, embrace rose bushes.  Observant, Alexandre had an idea.  He would throw courge seeds on the heaps of straw and shit cleared from the sheep sheds.  His theory is that this would speed up the composting activity, and be a more aesthetic cover.

The trouble with home made compost is one never knows exactly what is in it.   This is probably why I have a flourishing cherry tomato plant amongst the petunias of the kitchen window box.


Posted by doina percival at 12:23 AM No comments:

A glut of fruit always produces a crisis, especially for those of the 'waste not, want not' school of home management.   Composting excess fruit, or allowing the sheep to eat themselves sick on it, seems like a cop-out, like ducking responsibility towards a demanding gift.

Last weekend five cageots - lightweight wooden cases - of ripe apricots from Provence arrived at La Chaise.  Five kilos of fruit per cageot.  It was a collective order gone wrong, some people did not follow through on their orders.  A few rotten fruits in each box rapidly contaminated the others.

The theory was that the fruits, picked at near maturity, had suffered from being transported in a refrigerated van and then put in store during one of the Dordogne's erratic heat-waves.

Emergency jam making was the order of the day.   No time to shop for new jam-jars, extra sugar or sugar with extra pectin added.  Fortunately I have just acquired a new jam making bible - from the 'Jam Museum' , Museu de la Confitura'.*  A major virtue of its recipes is that only half the usual amount of sugar  suggested by English language cook-books, is considered necessary. So per kilo of apricots I only need half a kilo of sugar.


I halved the small fruits and macerated them overnight.   By breakfast time the sugar was all dissolved and the fruits looked almost transparent.  A little slow cooking to make sure the sugar entered the fruit, then the zest and juice of one lemon, a brief but fast boil - and it was done. Four pots of assorted sizes, sealed with white paraffin wax and a random selection of lids - job done.

And a mind left free to speculate on one of its favourite theories:   that transport is the root of all economic evil.


Posted by doina percival at 2:16 AM No comments:

Somewhere in the woods, between La Chaise and Chantepoule, there are now pairs of wild chickens, cock and hen couples, that have escaped from the chicken caravan and its park.  Perhaps as many as four pairs - or perhaps they are all dead.

One reason for optimism is that no feathers have been seen littering the woodland floor.  When chickens are attacked inevitably feathers are torn out.  The mess left behind after a fox, marten or dog raid has to be experienced to be believed.   Believe me.

For several weeks the hens (the term 'hens' includes cockerels) had been refusing to overnight in their caravan.  Instead, they chose to roost in the lower branches of the huge bay tree that looms over the garden wall.  They could fly because their wings had not been clipped.  It is usual to clip the flight feathers of one wing, so that the bird becomes unbalanced and cannot take off in flight. Only then they cannot fly away from danger either.

Another reason for optimism - with a lot of imagination - is because of the name of our nearest neighbour hamlet, Chantepoule or Chantegeline in its medieval form (from the Latin gallus).  The name can be variously translated as 'Song of the Hen', 'Hen Song' or even 'Singing Hen', depending on mood.   So perhaps Chantepoule is a numenous place for hens.


Or perhaps not.  This innocuous little hill top hamlet, complete with former school, small church and churchyard with maybe less than ten family vaults, had a very bloody history during France's Wars of Religion (roughly 1562 - 1598).   There is a famous battle that bears its name.  In 1568, the Comte de Brissac (catholic) ambushed and killed the Baron Paulon de Mauvan (calvinist) in the woods of Chantepoule.  Doubtless many nameless peasant foot soldiers died also.

Actually, I remember reading somewhere that when the Chantepoule woods were cut down, a skeleton wearing armour was discovered inside a tree trunk. I have a fly-paper memory to which random snippets of information stick.  But I am not going to get cross-eyed checking this again.

Odd things, chickens.  A long time ago we bought six bantam hens (poules parisiennes) because they were pretty and the eggs reputedly very good. The seller was a charming professional breeder with a stand in St Astier market.

We duly shut them up in the hen-house for 24 hours with food and water, then let them out.  They refused to enter that day and flew up into the crippled oak that leans over the hen-house.  No way of cajoling down into 'safety' in the hen house.

The following morning there were neither bantams nor feathers.  John reckoned the seller had trained them to return home, like messenger pigeons.

Posted by doina percival at 2:43 AM No comments:

A short life, not always merry

The last ten days have been a terrible reminder of the fact that man proposes but God, gods or Nature, disposes.  We react more often than we act.   Death arrived suddenly amongst the lambs after worming.  We had no means of knowing whether it was the strength of the wormicide that stressed the lambs or whether they suffered a new, fatal infestation.  A warm, wet winter helps parasites to proliferate.

Disposal of dead animals is never easy, neither emotionally nor physically.  When an animal bred and cared for dies before the proposed time of slaughter, the breeder feels a failure, neglectful.   The unspoken bargain between human and food animal (via God or gods, if you like) is that the former provides a sheltered and natural as possible life for the animal before what is called 'le sacrifice' in old fashioned French.


The eleveurs in the Dordogne have not been helped by the re-organisation of
'equarrissage' service.  It was run from a centre about 20 kms away from La Chaise, not always as speedily as could be wished but a service with a human point of contact.   It was likely that someone's aunt's second cousin's nephew worked there.  Indeed, a lady in the neighbouring village who offers a catering service, was aunt to a young man who worked for the local company.  Now, for reasons not known to me, it is run by a company some two hours' drive away - contact by automated telephone or internet.    Luck of the draw will decide when the collecting lorry comes by.  Meanwhile the cadaver, covered discreetly but firmly against possible carrion eaters, awaits in a wheelbarrow by the side of the road.

In as good an example of pathetic fallacy as ever discussed in literary classes, the weather has been as temperamental as a toddler, beyond human control or prediction.   A heavy, lurking quiet as the clouds pile up, the sky darkens and we below wait - for an explosion or a whimper.   There have been times when we saw the storm clouds just a couple of kilometres and a valley away, shouting thunder and streaking lightning there as we stand in pattering rain here.

The short term weather forecast promises more unsettled weather.  On the positive side this is mostly good for the re-sowing of the greens that suffered from the earlier warmth.  But, on the downside, the damp will encourage the parasites.  The sheep may have to change pasture more often than they would  like.

Meet my new best friend - does anyone know his name? 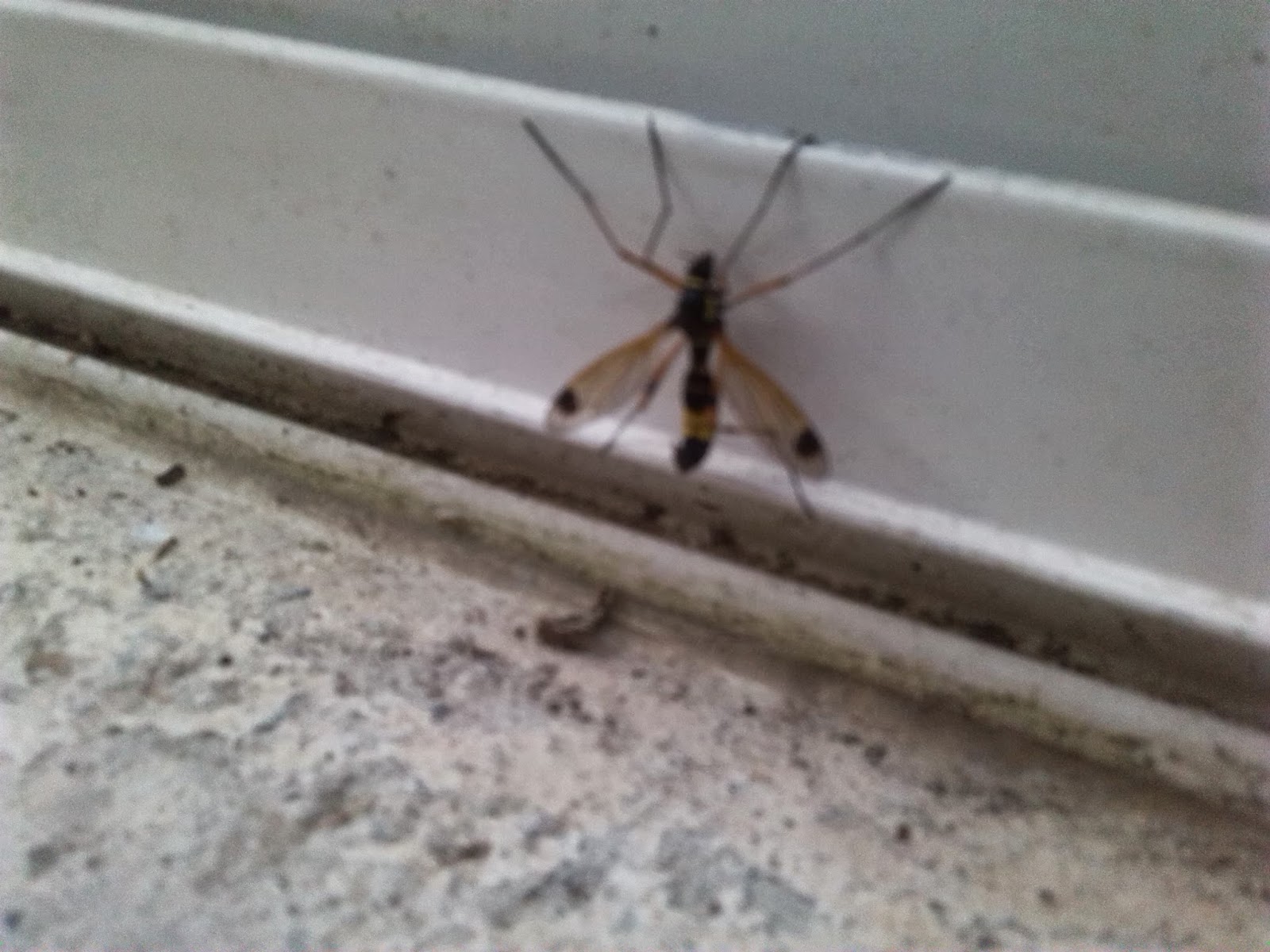 Posted by doina percival at 1:29 AM No comments: