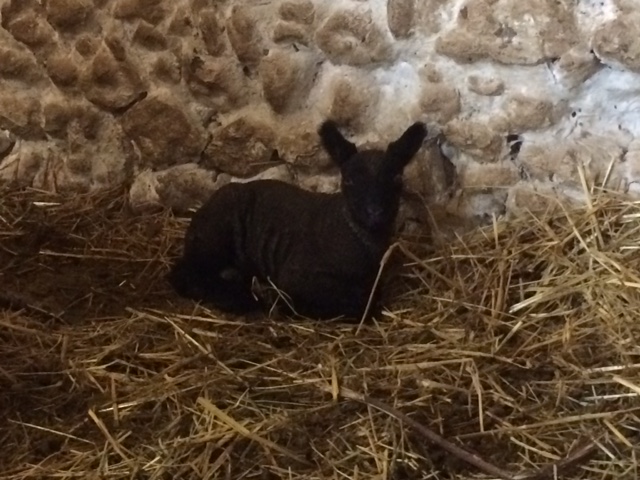 ROGER THE RAM; HIS STORY.

This is the Firstborn of  the 2017 millesime, my fourth year at La Chaise.  It is a boy, a very large, very active boy.   I am well pleased as is his mother, one of my senior women. A good beginning to the Chinese year of The Rooster. (That little pest wakes us too early - hardworking, resourceful, courageous,  my four feet!) But that Saturday morning I took his crowing as a salute to this Firstborn.


The First was born in a shed on straw, then confined with his mother in a small pen.  My memory is that I was born in the open, some five years ago, on a moutainside in the Pyrenees, There might have been a roof over our heads,  I do not remember. But my liking for unfettered space, varied grazing, is obviously due to the surroundings of my youth which nurtured my intrepid, exploring character.

Not long after my first anniversary, along with a couple of brothers, I was bundled into a very confined space on wheels, unloaded into another small space, given rather poor hay and some warmish water. Various people poked and prodded me, especially on the rump - tiresome. Then I was pushed into another closed vehicle for another long ride.  Eventually I was pushed out into a field where I faced this:

Not seemingly a welcome committee. But, ever reckless, I charged forward and presented myself. All went well that late summer, the autumn that followed, I did what I had to do. There were just a few snags, like fences.   I was not used to fences. I do not approve of being confined to a certain grazing ground.  I like to choose my own grazing territory and company. 'Autre pays, autre moeurs'  I thought to myself, reserving judgment.

Then, horrors!   I was taken away from the flock and shut into a small space, stone walls, a drinking fountain, a sky light and a half door, barred and bolted.    Food came twice a day, green hay, lucerne and a good mixture of ground cereals.   But I was shut in.  I did not approve and bellowed my rage.
I gave a few tentative taps with a foot where the bolt slid into the wall.   I just knew that, with a good head butt, I could break it and get out.  Out was where I wanted to be.

Then, suddenly, a younger ram was shut in with me.   Two rams in one shed, especially if one is younger and slighter, is not normally a good idea - but my shed was so small I could not get far back enough to take a good run for a hefty head butt. Also I am basically good natured.   I noticed that the poor thing limped, back leg did not function properly. Poor little chap.   Not good enough for breeding, not acceptable to commercial butchers.   I adopted him as my own. His name was Tripatte.

Once the people had seen we got on well together we were allowed out.   But, doubtless mistrusting me, the people put us in the woods.   Even if I had wanted to, there was no clear way to get a good run up behind a head butt.  There's good eating in the woods, nicely varied, young ivy leaves, chestnuts, the leaves on low branches of the woodland trees, the odd spot of very tough grass.
Eventually the people decided that I was to be trusted with Tripatte and we were allowed into the fields together.  Again they were fenced off fields which was extremely annoying, especially when the women and children were outside also, although a distance away.  This was soon sorted.  A study of the fencing, its weak points - where people went through on the tractor, where the fencing was no longer under tension, where there were one step stiles.  A few sharp taps with feet, a head butt if necessary - or we simply jumped up and over.  We were often found out and all of us were persuaded back into the main barn. There is no resisting the pan of grain in front and the persuasion of the dog behind.   Once inside Tripatte and I were taken to our pen, confined for a couple of days.


And so the last three years have passed comfortably.   Tripatte no longer limps.    The people insinuate that I may have dated one of my last year's daughters.    Myself, I think it was Tripatte who dated one of his half sisters.  There is no way of knowing. Tripatte - triplets....ovine genealogy is much more complicated than human.


Posted by doina percival at 10:56 AM No comments: