A confabulation of cranes passed over La Chaise early this March, string after string of black V shapes, honking at each other. It seemed to me that they circled over our roof. Why I don't know – perhaps they were trying to locate the direction north by looking to see where the moss was on the trunks of the oaks. Or they were just arguing about it.

Apparently moss grows best on the north side of tree trunks, or so I was told during my one and only evening at a Girl Guides meeting some forty years ago. This would be helpful, apparently, if I was ever lost in a wood.But I had already read Little Red  Riding Hood..and never went to Girl Guides again.

Although I did not notice it particularly we must have experienced a very long, damp period from the beginning of September until now. There is moss on everything, even on things that are not wooden – such as some of our wrought iron garden gates. Yes, I know – lack of maintenance. 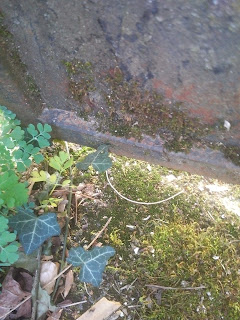 I did get rid of the ivy, anyway.

There is moss also on the leafless japonica that exploded into blossom soon after the cranes had started flying north. There is moss almost everywhere that is damp – like the terracotta tiles on roofs and walls. 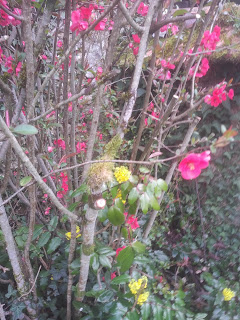 On the roofs it is simply moss, nothing else, but with luck frost season is over. Only the locals* warn we must wait for the Saints de Glace to come and go before we can be sure. There are three of them, Saints Marmert, Pancrace and Servais whose days are 11, 12, 13 May! Frozen moss will crack the tiles. Hopefully a dry period – let's call it 'summer' – will dry up the moss and no harm done. 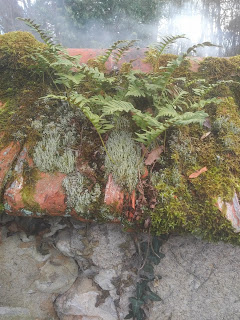 See how many friends the moss has!

But in some places the moss is not alone. On one particular tile on our garden wall it shares space with ferns and some hair like lichens. Some twigs on still naked trees are completely covered in different forms of lichens, which are, I read in some leaflets I sent for years ago, an association between fungus and alga, about 15,000 versions...try not to think about that.

Think how artistic your 'flower' arrangements can be instead.

* I had a long argument, once, with a Dordogne taxi driver as to whether I could call the local French residents les indigenes but he found that rude. Indigenes he said, were only to be found in non European continents. The people of the Dordogne were autotochtones.