Return of the Slugs

At last the rains came!  They came at intervals, noisily, but little and to little
effect. Except, of course, being unpredictable, many people and things got unexpectedly wet.  Washing and drying cushions of thoroughly soaked outdoor furniture is no joke.   But, I suspect, if I had not left it outside - as a sacrifice,you understand - we might not have had any rain at all.

In all, over the last week, we have been blessed by about 20mm of rainwater - different parts of the county had more or less.  But the downpours have uplifted the spirits of people, birds, and slugs.

People and slugs have the same interest - the imminent arrival, should the weather warm the soil again, of boletus edulis,  or any other form of  edible boletus.   I found a first one, it looked like a proper bolet until I grabbed its stem.  This went bright blue.   To be avoided.


It is as though the slugs came down with the rain.  They were everywhere in the woods - not crossing the open, grassy spaces but staying under the trees.   Perhaps because the buzzards like a slug or two?   We have a couple of noisy pairs in the valley.

The song birds, too, revived with the wet.    Possibly because the wet brought with it, let's say revived, insect life. Just flies, the odd ant, and some rather dopey moths.   I rescued two tiger moths from the swimming pool - alive. I even rescued a couple of crickets and a wasp.  There is still no apparent return of the vespidae family.

But the slug are happy, finding toadstools, and friends.    Here is the beginning of a promising relationship. 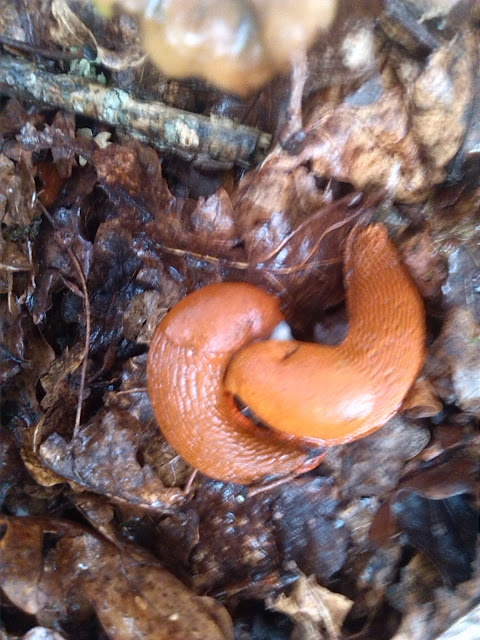 Posted by doina percival at 6:49 AM No comments:

Dust and Heat - no insects

The 15th of August, a pivotal date in the French holiday calendar, is well and truly past. Most holiday visitors have returned home. But the bees, wasps, hornets and Asian vespe-nasties do not seem to have returned. There are few flies or moths.No slugs.

I have seen one bumble bee, no wasps but probably a hornet. Something went under the hem of my skirt. My heavy hand came down. It stung me and died. I limped with a hot, swollen knee for the next week.

The good news is that the Little Black Hen has ceased to hope she could turn golf balls into chicks, even after several weeks dedicated sitting.   She is back to producing her wonderful rich yolk eggs in their pale grey-green shells.

But the autumn crocus has appeared rather early, not deterred by the absence of rain. Curiously it does not seem to spread very far from its original locations when we first saw them over 30 years ago. Must check why.

The absence of insects, especially moths, is a disaster for the bats that have recently installed themselves in JP’s cool cellar. They come out at dusk, fly hopefully under the great oaks at the end of the garden. Whether they catch anything we cannot see – I did save a tiger moth from the pool but it disappeared as soon as its wings were dry.

The bats have become more numerous over the past couple of years and we are hopeful their presence will prove our absence to any local authority concerned with such matters Especially as dearly beloved has a tendency to leave the cellar light on – I can see it through the cracks in our bedroom floor boards. Surely darkness loving animals would not stay where light is on all day? Anyway, my former home made liqueur shelf is now nearly a half inch deep in mouse shit. Proof of human absence.

The continual human and ovine shuffling in the dust does throw up some curiosities, mostly fossils. I use them in the window boxes of the geraniums. The fossils appear in the stone paths and on the very dry field slopes. Some are simple cockle shell remains, others seem to have had a possibly nacreous shell.

The sheep, which love to rub their backs against the rough fruit tree stems, revealed the collection of fossils below – best fossil ever! According to the geological map of La Chaise there is a tongue shaped area of sandy soil leading into the field which sometimes throws up some pretty agate style stones.  The rest of the territory is solid limestone with a little earth on top.


Just stop to think: once this place was under sea.

Posted by doina percival at 7:09 AM No comments: