Send for the botanist! Soon.


The wild orchids with which La Chaise is plentifully endowed are tougher than their scarcity elswhere would lead the innocent to believe.  The very earliest ones, the lazy purples that look like red clover from a distance, are trodden on and sat on by the sheep.  I expect the lambs even taste a few.   I know that Alexandre mows those few that venture onto the fairways.   But every year they come back, especially under the clump of ash trees in the first field. 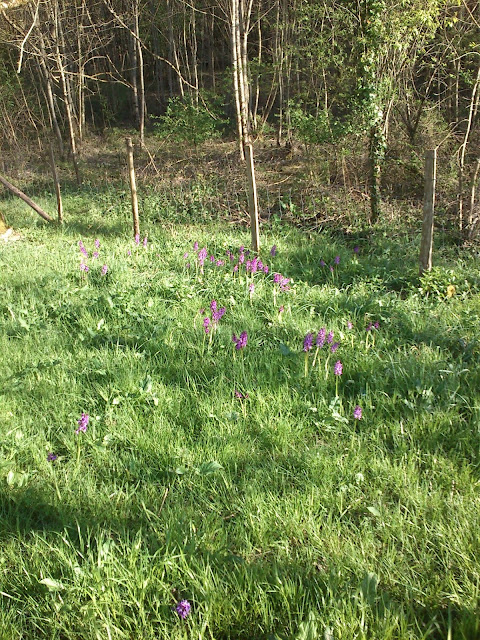 These are the ones to the right of the ash trees - so not sat on by sheep.

For some years, before sheep, we could always rely on orchids to come back in the same places.  The burnt tip, the pyramid, the scented, the hanging man were always under or around the rough pasture, known as 'Greece' to us, which was heavily populated by aged juniper bushes. 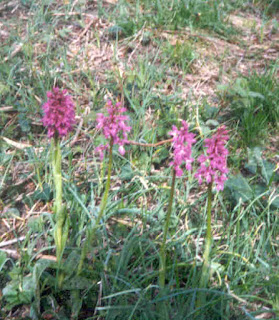 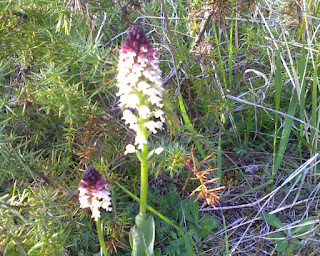 The insect imitating orchids were usually in the rough grass, just above mowing level - the fly orchid, the spider and bee orchids were relatively plentiful.  They seem to have since left us in favour of the other side of the sheep fencing, into the inpenetrable wild woods. On the other hand some  colonise the edges of small rural roads, carefully on the far side of the ditch so that the cantonniers with their heavy machinery do not fauche them. Our local, recently retired, cantonnier, used to carefully mow round the ones that had not retreated.

In the past couple of years the junipers in 'Greece' have died off - but new ones are coming in strange places.   One lot has decided that fate has destined it to be a hedge and so is lined up along the sheep fencing dividing the horse fields from number four fairway. Not so much a sign of plant intelligence as the logical explanation that they get neither eaten nor mown at the foot of a fence. So far, no orchids

The first year of the juniper move the 'serapia' type orchids moved from the upper slopes of the horse fields to the safe side of number three fairway, sheltering in amongst the pine trees.

We fenced them round but the sheep trod down the fencing. This year one has decided to become totally sheep proof - here it is, inside a new juniper bush! 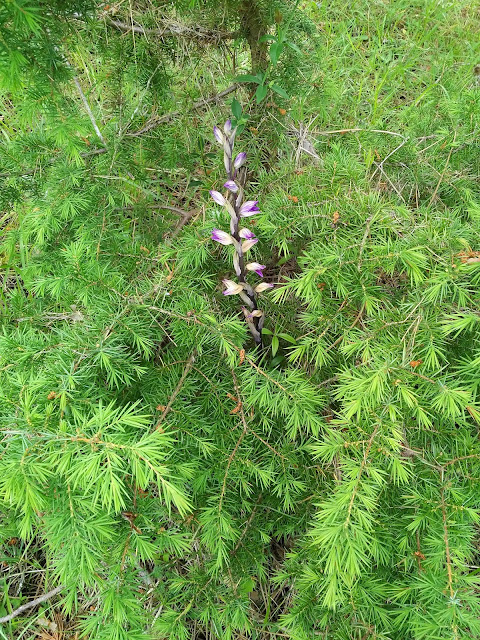 Won't someone send a botanist, soon, please.    La Chaise has just got to be interesting to people interested in plants.

Posted by doina percival at 1:08 PM No comments:

Oak on the range

It is not even the end of the second week of May but April's left over rain has been teasing Dordogne folk with its comings and goings.   At present it is coming which is sad for holiday types but much needed to fill underground water reservoirs.

My problem is more domestic, more mundane - do I, or do I not relight the Rayburn range?  This is not a simple question, cooking on a solid fuel range is not the same as switching on or off gas/electric switches. And this particular range does hot water, also radiators, if properly fed.


I confess to being besotted with my range - it cooks beautifully, keeps the kitchen warm and the house when encouraged by a slight re-arrangement of fire bricks and additional wood. Now that our wood is so dry, five year old oak and chestnut, it does not always keep in overnight but elderly persons get up in the middle of the night, so that is not a hassel.

What is a hassle is the pre-lighting cleaning of flue, cooking surface, inside the fire box and the hot-water radiator.  The flue has been cleaned because the chimney sweep came at the beginning of March but, if one does not keep the stove going for a long time, the flue will get dirty.   Worst case scenario, some of the soot might catch fire.   (I have managed to set fire to one of our open hearth chimneys - add sand and/or wet blanket and cut air supply, immediately.)


This immense wood-pile, I know not how many metres long or high, is expected to last us, plus Alex and Audrey, and Jerome and Clea, and their respective wood burning stoves, for at least the next six years or more.    The bucheron did an excellent job of cutting down old oaks and splitting the trunks and bigger branches into metre length longs.   These Alex, or Jerome, then cut to lengths suitable for all our respective stoves or fireplaces.   'Les sanglots longues des violons de l'automne,' with all due apologies to Verlaine, are in fact the rising and falling whine of the circular saw.    It is not a particulary spring like sound, so again one hesitates to relight the range.

In case anyone thinks we are recklessly exploiting our woodlands - be reassured.   The oaks are re-seeding themselves everywhere.   The stumps of the trees we cut down to make a 'lawn' have turned into oaklet nurseries.

But then, very soon, this year's Saints de Glace, will arrive.    They are so named for, folklore says, on the 11th,12th,13th May a cold snap is to be expected, often with frost.    This year's saints are Estelle, Achille (male) and Rolande.

As a half-way measure I think I shall scrape down the cast iron cooking plate, rusty toast is not good, not even with salt butter and home made marmelade.   Then I must oil it,as one does to season cast iron or steel cooking pots.   And scrape the mixture of rust off the top of the oven underneath the hot place.  Also clean between the boiler alveoles with a wire brush....and find a place to empty the ash pan where the grand-children cannot play with the ashes or the chickens deflea themselves....or possibly not.

You see, the problem is not a simple one.


Posted by doina percival at 10:16 AM No comments: