Only nine days to the official start of spring but the signs of its imminence are unmissable. Now we can actually think of something other than the irregular arrival of lambs even though eight mothers have still to produce. The lambs to ewes ratio is now 1.5 and we are all very proud, especially gold star god-mother Audrey.

Underground the moles and the worms are busy, the neat worm casts contrasting with the untidy heaps of the mole's mining activities. We have stopped feeding the birds for there are insects as well as worms to keep them happy. Stopping the dog from attempting to dig up the moles is more difficult. We assume she only want to see what is happening, not actually to eat the moles, but it causes unlovely chaos. And Haska does not have the absent Elvis-non!'s excuse of terrier blood in her veins. She'll get over it, is easily distracted by a new stick. 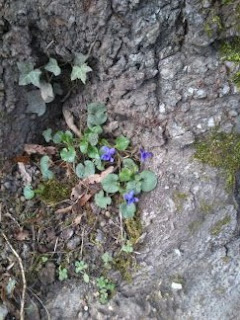 Above ground the flowers are a joy. The first to show their heads were the violets. There was a bunch of practically white violets under the vegetable garden's magnolia and, nestled between the roots of the lime tree, a contrasting very dark Victorian mauve violet. Not only does the violet come in a huge range of colours, the number of defined varieties seems to have doubled in the past hundred years to around 400 plus. But there is still only one violet that is of any culinary use – the 'odorata' – but try distinguishing her from her sisters – not possible for amateurs. I have tried to make crystallised violets with moderate success, my eau de vie de violettes was a total disaster. Some things must be left to experts.

below: daffodils coming up amongst the roses.... 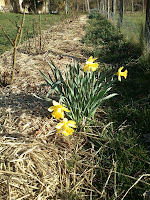 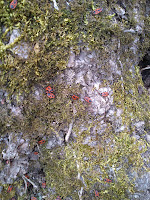 and gendarmes on lime tree

The weather, as befits Spring, is erratic. We had a few beautiful, warm and sunny days, so decided to start airing the gîtes ready for the summer. I had forgotten that, if a freezer is in a place where the ambient air is colder than the air inside the freezer, it will defrost, then re-freeze when the position reverses. So I found 2 x legs of lamb and one shoulder, that I had carefully frozen and stored, which had gone through this process in one unheated, shut down gîte. Not funny.

What is funny is that inanimate things seem to have multiplied, as well as those living. For some reason I have two spare single mattresses...perhaps I had bought new ones from a retailer who would not take the old ones away. But where had I stored the old ones over the past year? No time to waste brain power on such idle matters when there are curtains to be washed, cupboards to be cleaned and bugs to be chased back to their proper home, outside.

Ah yes, Spring brings out the bugs as well as the flowers, some of these, too, are pretty – such as the red and black spotted gendarmes on the other lime tree.
Posted by doina percival at 2:40 PM