Counting sheep has been abandoned as sleep inducement. I have replaced it by self-hynosis and deep breathing....flat on your back, start by relaxing the toes, go up the leg, etc etc. This sometimes works. Counting sheep now just reminds me of things I have not yet done, such as getting their ear-tags, or filling in forms, hardly sleep inducing. Last Friday no sleep magic would work as the roof was hammered by a mega hailstorm. Seriously large hailstones hit our aged roof tiles so badly that I had to take a torch and change the bucket under the official leak.

An official leak is one of which I am aware and for which I have not yet summoned a roof tiler. It is almost a superstition with me now: keep one roof leak and you will not have many scattered ones. We have been here so long that our roof will have to be re-done a second time which, for me, is seriously weird. As someone who comes from rainy countries I expect a roof to keep out rain, hailstones and other undesirable features of the climate. Never having lived anywhere longer than five years – before La Chaise – I am not used to replacing things such as roofs, never mind replacing them twice. Nor am I used to the attitude whereby you – or rather a handy-man who does not suffer from vertigo – goes up on the roof to temporarily re-jiggle the tiles until the next proper replacement falls due.

For us, that time has come. Fortunately roofing practice has advanced greatly since we had our first two roofs installed – the original and its replacement. To start with it has been conceded that there is really no excuse for roofs to let rain in, that there are methods for stopping the rain coming in. The fact that some of these methods are from outside the Dordogne, indeed possibly even from outside France, no longer devalues them. So shortly I shall have the joy of summoning various roofing contractors to ask for estimates. I shall be scolded, tutted over, told I should have done it x years ago – indeed should have done it differently in the first and second place. But that is an expert's privilege.

Meanwhile the hailstorm has totally done for the cherries. All those not already damaged by unseasonal frost, or intermittent heavy rains, or greedy birds, are now on the ground. It has also battered the roses which are looking quite bedraggled, especially the prolific climbers on the garden fence and gate. Already their flower heads had dragged them down, now they are totally beaten down, beyond repair by pruning. 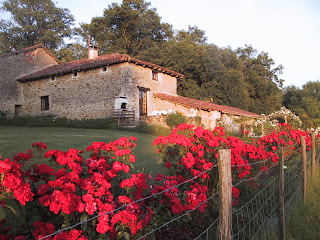 Fortunately, the red rose hedge round the Farmhouse and the pool garden, with its intervening lavender bushes, has resisted superbly.

Posted by doina percival at 1:58 PM