Why I kiss the Mayor

It may have escaped your attention, especially if you do not live in France, but this coming Sunday is the first round in the French Presidential elections. It is the first time in all our 30 plus years here that we are dismayed by both candidates. The incumbent President is an uneducated, unpleasant little man with an oversized ego, no apparent hard core of beliefs except to hold on to power which is gradually pulling him towards the seriously unpleasant right. His over-educated, smooth challenger describes himself as 'Mr Normal' and seems boringly so. His lack of experience of practical economics or anything political outside of France, his lack of government experience may be normal but are worrying. On the positive side, he did manage to hold together a fissiparous Socialist party for many years, a feat in itself.

But why, you may expostulate, should this bother me? I am not a French citizen, not responsible for these politicians or their politics. The trouble is that I am on the receiving end of their political ideas – I pay my taxes in France and cannot vote for those who spend my money. 'No taxation without representation' is a famous slogan born in that other country currently undergoing Presidential elections – the United States. And this is why I started to kiss my local Mayor all those years ago.

As a citizen of a European community state, I am allowed by the French government, to vote in local elections which are held roughly every five years. There is some local electioneering, party meetings and greetings and then the great voting day when I post my bulletin in the transparent vote box. Both incumbent and would be local politicians are present. Every time I go up and kiss the Mayor (no hardship, he is very attractive, was the sports instructor of local secondary school) and whisper in his ear. I want him to create a bill to bring before the French parliament – possibly even the European parliament - that will suggest that EEC citizens can vote where they pay their taxes. So they just might have a little influence on how their money is spent.

And to add insult to injury today I received the hefty book of instructions, plus form, for filling in my UK tax return.   I have dutifully paid my UK taxes ever since I became a UK citizen, which is about the same time I left the country.  When I lived there, I was not British, so could not vote but paid my taxes anyway.  You may argue that in both cases I benefit from state spending funded by taxes - but I still argue that I have no choice in who decides how it is spent.

Given that the Eurobureaucracy was able to produce legislation on the size and length of cucumbers (this may be a bureaucratic legend, but it is a good one) it should not be beyond their collective wit to create a transferable voting system.   Just think of all the jobs it would create. 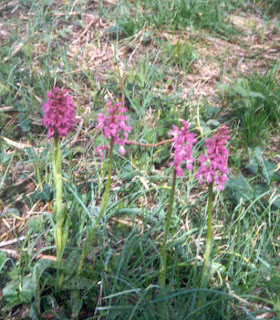 On a less grumpy note, I have seen the first wild orchids – and before the sheep got to them! The Lazy Purples are always the first to show their untidy heads, scattered under the ash trees in a corner of the nearest field.